Shooting at 420. And the mountains take the lives of five backcountry snowboarders, etc. Agggghhhhhh! All dreadful news for one week. But in each crisis… we see an opportunity to do something different.

They say hindsight is 20/20. Looking at the avalanche information from our perspective, we remove  time, emotion and consequence. Abstracting a story, we hope to gather all the clues to piece together our wide angle shot so that we may grow from experience.

The backcountry snowboarders were apparently skinning up Sheep Creek near Loveland when a four foot deep and 500 feet wide slab of heavy spring snowpack broke free above, cascading down the mountain side with the force of a hurricane. In a matter of seconds, the snow fall swallowed the six little snowboarders in its path. Only one would live to ski another day.

According to the Colorado Avalanche Information Center (CAIC), the avalanche danger for Vail area that day was considerable because of persistant weak layers – hair triggers – hidden deep below the surface of the snowpack. Waiting in silence ready to break away from the mountain and slide into the valley below at any time. The Sheep Creek bowl is a well established avalanche danger zone. In retrospect, it would have been best if the backcountry explorers had avoided exposure to the slope altogether under those conditions. 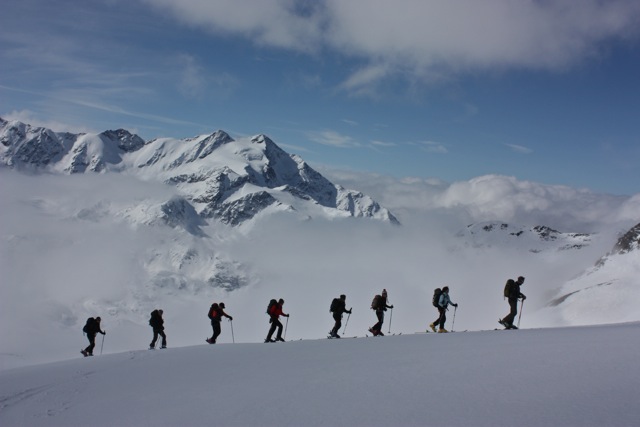 Troubling as it is that one of the deceased was a backcountry guide, we must understand and accept that momentary lapses in judgement happen to everyone from the homeless guy on the corner to the president of the United States. Living means making mistakes and sometimes those mistakes mean death. It’s sad but there is really nothing to do but keep breathing, keep moving forward, trying our best not to make the same mistakes twice.

To sum everything up, here are some safety precautions to take on backcountry days with a considerable risk avalanche:

Before you go out into the backcountry (especially if you are without an expert SGT guide who does this everyday) understand you must trust your decision making abilities with your life. That means you must recognize dangerous situations and make decisions accordingly.

Know the facts. Be aware. Ski another day

Our hearts go out the friends and family of our respected backcountry brethren who may now rest in peace.